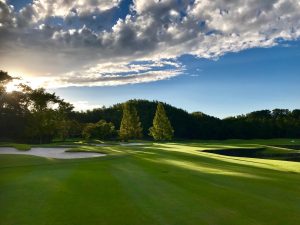 About 13 km to the west of Tsu city lies the aptly named Excellent Otori Golf Club. Famous for its water features and for playing host to an epic TV match play battle between Japanese golfing legend Shigeki Murayama and Tiger Woods in 2001, Its pristine fairways and breathtaking Mie views have vaulted the course ranking with domestic and international golfers alike.

If you like dramatic entrances, then you will love the huge artwork of a traditional scene of “Miyagawa no Hado” and even a ‘Noh’ theater stage for ceremonies and plays giving the clubhouse a very traditional feeling. The scale of the clubhouse is impressive compared to clubhouses back home, and the restaurant on the 2fl overlooking the massive lake and 9th green is really a fantastic view and has me eager to get out and play. Downstairs, the changing rooms are well appointed and large, the ofuro (bath) I am told is a must here, recomended for taking away all the aches and pains of a day on the links.

The course was opened on 1998 and designed by renowned local designer Kobayashi Mitsuaki. It measures a respectable 7,033 yards in total from the back tees which is long for Japan, but the real showstopper is the lakes which are such a dominant feature in the design. In fact, the course was designed so that you had to take a boat to get from the 18th green to the clubhouse! It is reported that the course has the most amount of cubic feet of water than any other course in Asia with the main lake covering a whopping 87,000 sq-mt.

First impressions on the tee is what good condition the course is in, this is peak season in Japan and the 1st hole- a straight par 4 looked vivid, vibrant and inviting. With some bunkering on both left and right of the fairway our drives needed to be long and accurate, but once passed the traps a large receptive green awaited. Being relatively new, the tradition of dual greens had been discontinued when this was built, opting for larger, more interesting greens. 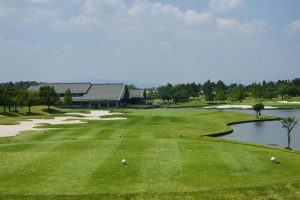 The second hole, another par 4 moves slightly to the left off the tee to reveal a beautiful elevated green, well protected with a bunker in front. One thing you will notice about Japanese courses is the false fronts on a lot of the greens which tend to deflect balls into surrounding rough or bunkers, so best to avoid the trouble and aim for the heart of the greens. Some, clutch pars here for us and we were onto one of my favorites, coming back towards the clubhouse, the 3rd- a par 3, has a huge frond-shaped bunker all down the left, adding to the visual feast being on a headland in the massive main lake with clubhouse and the surrounding hills in the background. I noticed the wind is up and swirling around these lakes, so club choice is essential. 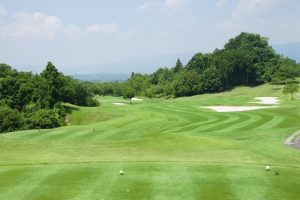 An uphill par 5 was next, not reachable in 2 from the regular tee, but a very birdieable hole none the less.  The 5th is a classic, only a 312-yard par 4, this hole is brilliant; big bunkers on the right emphasize the straight line to the green, which is slightly down hill, taunting you to take on the direct line and smash a driver. Strategy should have dictated we all take an iron and lay up, but we took the bait, and all hit driver only to find some sort of trouble with bunkers also guarding the tight landing zone in front of the green.

The 6th 7th and 8th provided a calming and more sensible stretch, with scoring a little easier before coming to the masterpiece 9th. This is a hole that will keep you coming back for more! Back into the wind you are hitting from an elevated tee towards the lake mostly on your right. Awaiting your approach is a beautiful island green which requires a confident strike to clear the danger in the swirling breeze. After a few attempts we were over the water to dry land and made our way back to the clubhouse for some much-needed nerve calming and to check out the local fare at the restaurant. 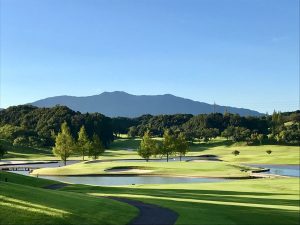 As with most courses in Japan, a customary stop for lunch is the style here. This might annoy some visiting purists, but it is my advice to just relax and go with the flow, the food is really great here so just indulge in the experience. Lunch consists of ordering a Japanese set. Tasty options like the Katsu curry (fried pork cutlet with curry on rice) and Ramen (noodles in soup) are very popular, but Japanese delicacies such as sashimi and sushi, tempura, eel, are also available, and generally costs less than ¥2,000 ($20). For the 19th hole, a full bar is of course available, I notice most people are drinking beer or shouchu during lunch or after a round, and the beer is so good here it made sense to join in! 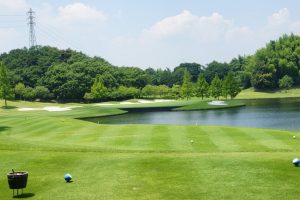 After a delicious meal and a cheeky beer, we were back on the course and looking forward to the next 9. Number 10 is a straight par 5 with O.B. all down the left. Maybe it was the tempura and beer at lunch, but we all had a bit of a hard time with this hole, and almost finding every bunker! After some comical scores 11 and 12 provided some relief as two short and very score-able par 4s. Back on track and feeling confident, we turned the corner onto the 13th. tee, which was for me the most beautiful hole on the golf course. Beautiful but tricky, with a precision shot required over water and onto a green which also happens to be sandwiched by bunkers.

14 and 15, although short par 4s, are a little tricky with the lake on your right and O.B. down the left, so a long iron or whatever you can hit straight is the order of the day but watch for tight pin placements which had us all miss the greens. The good thing about Japan is lies around the green tend to be not too tight with the native korai grass, so much easier to get up and down. 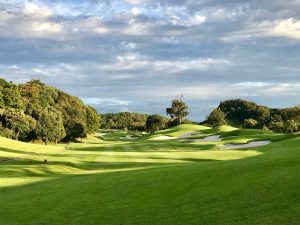 The 16th is a great par 5, with a slight dog leg left and with trees on the right seems narrow- but it’s the contouring in the fairways that is really striking that makes you think it’s more difficult than it is. What is tricky though is the two-tier green which had us all 3 putting due to the pin placement on the transition. The 17th is another signature par 3, giving the appearance of an island green,  with the water and the Mie mountains in the background it’s a great photo and a lovely hole to play, and set you up for the magnificent 18th- a meandering par 4 which flirts with the lake dangerously in places- cutting into the fairway, so best to keep it to the right. The green is again surrounded by water and is a fine place to shake hands, admire the view one last time, and head back to the clubhouse for the ofuro and a beer or two to reflect on a thoroughly enjoyable round.

The club has an 11-bay covered driving range which extends some 200 yards, as well as a bunker practice area. There are also two large practice greens and all very close to the clubhouse and both in and out tee boxes.

By car: About 70 minutes from Nagoya

About 90 minutes from Osaka

By train: 50 minutes from Nagoya station via the Kintetsu Limited Express to Tsu Station, then about 20 minutes by taxi. 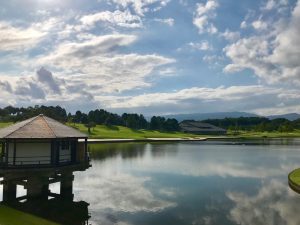