Ebi is Japanese for “shrimp” or “prawn,” but Ise ebi actually refers to the Japanese spiny lobster. Lacking large claws, some say it is a prawn, yet growing up to 30 cm long, it is often referred to as lobster. It is prized for its vibrant red coloring and clear, plump flesh.

The name that sets food lovers’ hearts aflutter is Ise-ebi, which derived from “Ise,” the old name for Mie Prefecture. The Prefecture on Japan’s main island of Honshu, which has vast protected areas and 1,000+ kilometers of Pacific coastline, has been the chief source of this sublime seafood for centuries. Although Ise is also famous for Akoya Pearls and Matoya Oysters, the real treasure in these waters is surely the fruit of the sea, Ise-ebi.

It is the climax in the story of the Kuroshio Black Current which carries South Pacific warmth northward from the Philippines along the Japanese coast before reaching the small islands of Ise Bay. Here the current mingles with river estuaries in the Kumano-nada Sea. Nutrients from these freshwater sources mix with elements of the subtropical Black Current, setting the stage for rich marine biodiversity. Ise-ebi thrives in the Ise-Shima area facing Ise Bay and Shima City, and Toba City and Minami-Ise Town are responsible for much of the catch. 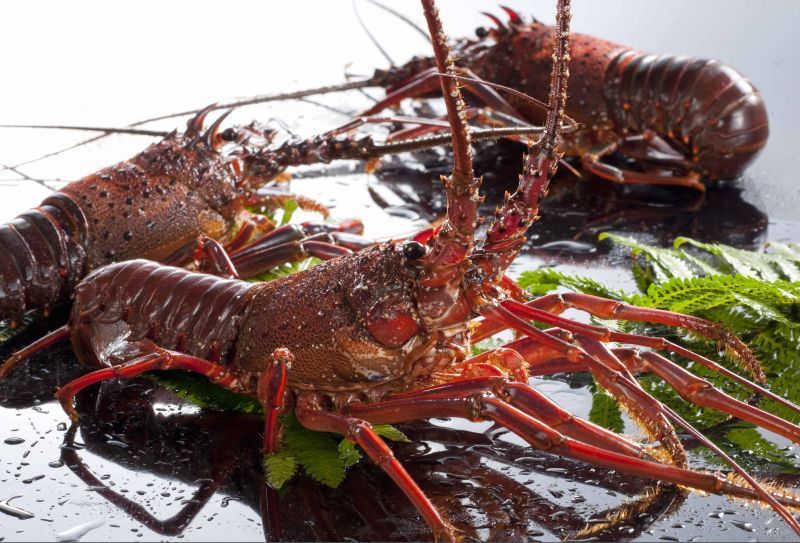 These crustaceans were once plucked from the shallow reefs by the famed, fit and fearless female ama divers. Mie Prefectural regulations governing Ise-ebi are stricter than anywhere else in Japan. Here, harvesting is even prohibited during spawning season from May 1 through September 30. Furthermore, any catch less than 4.2 cm from head to torso is to be released back to the ocean, while an additional 20,000 small Ise-ebi are set free in the waters annually.

Such practices and strict rules are enforced by local fishermen and women themselves whose mantra is to guard their own fishing grounds. Thanks to such efforts and Mie´s mission for sustainability, catches of Ise-ebi continue to flourish. Mie Prefecture consistently ranks first in catches, accounting for 25% of Japan’s 1,118-ton total haul in 2019. Chiba and Wakayama, also areas where Japan’s Pacific coast meets the Black Current, take second and third place, respectively. 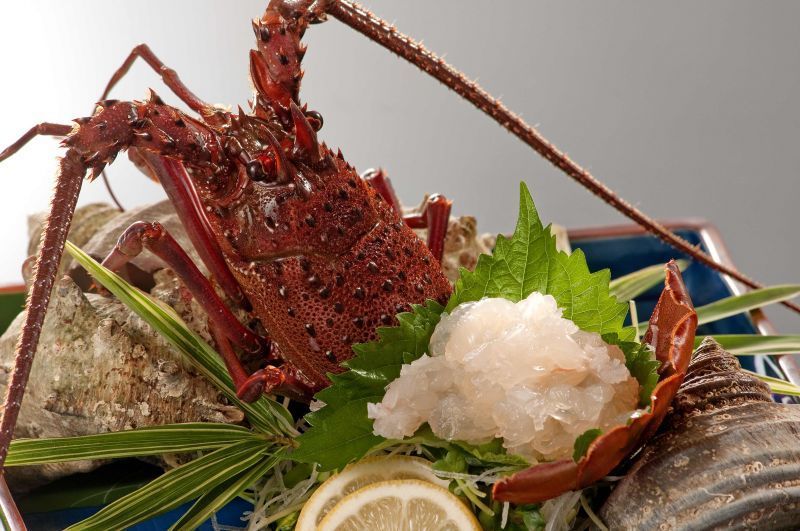 Shrimps were already considered a delicacy in Japan in the 8th Century. Ise-ebi appears in the 7th century literature as a celebratory dish of New Year, its long antennae symbolizing long life. Crack open the shell and the tender flesh will burst with rich flavor that melts on the tongue. Grilled over high heat, the ivory meat forms a crisp crust enclosing the juicy, savory morsel within. Whether as sashimi, steamed, in soup or served Western style, the variations seem limitless. Understandably, this delicacy has impacted local culture profoundly. Images of the giant prawn feature in famous artworks, literature, and New Year’s decorations and regional festivals are held in its honor every year.

When Ise-ebi is in season, this succulent-sweet delicacy is prepared as a key ingredient in prestigious luxury dinners. It also features highly in New Year’s osechi meals when luxurious seafood including Ise-ebi is served as Sashimi, in miso soup or stew, and in a simple salty water boiled dish.

It is well worth tracking down an authentic Japanese lobster haunt! 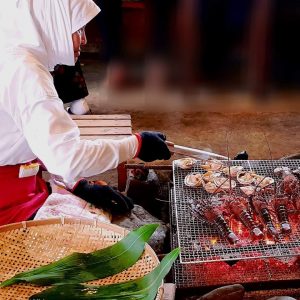 You can find Ise-ebi lobster in some of Tokyo´s high-end restaurants, or in Mie Prefecture for a fraction of the price. One of the most authentic and highly memorable culinary and cultural experience you will ever get is a lobster meal at the cozy hut of Ama Hut Hachiman. There, these fearless ama (women free divers) boldly broil fresh seafood such as spiny lobster, abalone, and turban shells they have gathered that day over charcoal, right in front of you. While savoring the fresh taste of the sea and the scent of the surf, you can listen to their accounts of the work and the history of ama diving which dates back to 300 BC in the bays of Shima and is hence considered one of Japan´s most ancient occupations.

Unlike in other Prefectures, you can enjoy Ise-ebi here and there. There are, however, a few restaurants that are particularly famous, one of them is “Kagetsu” in Toba City. In one ancient ritual of Ise Jingu Shrine, “Sugata Mushi,” three Ise-ebi are steamed together in a basket and offered to the gods. In homage to this rite, Kagetsu serves a whole Ise-ebi on a bamboo streamer, the bright red shell veiling the plump rich meat within. After visiting Mikimoto Pearl Island around Toba Station, tourists and locals alike often take the 10-minute drive to enjoy Kagetsu’s delicious steamed seafood fresh from the Ise Shima waters, especially Ise-ebi and abalone.

Another great spot in the area is “Ebimaru”, a beloved casual restaurant reminiscent of a fisherman’s house in the famous shopping district of Okage Yokocho near Ise Jingu Shrine. In addition to Ise-ebi dishes, their specialty is Mie’s local “comfort food,” “Tekone-zushi,” a colorful serving of sashimi on rice. 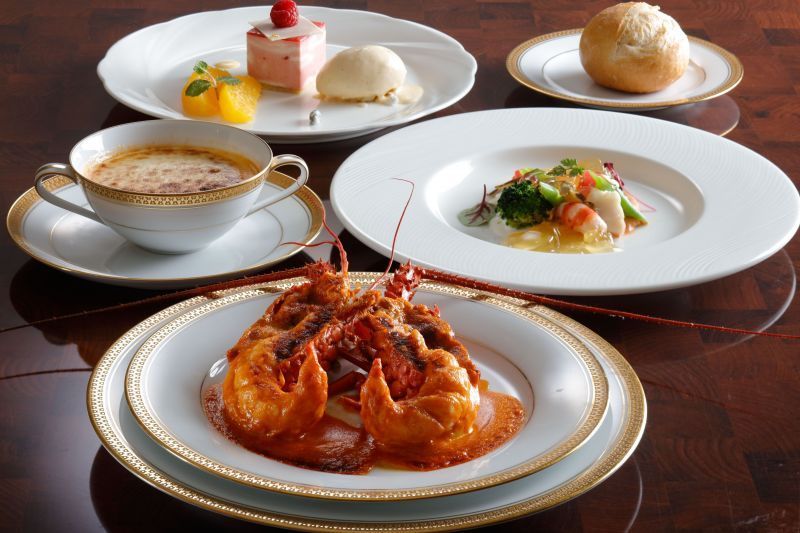 ore Western interpretation, enjoy Ise-ebi with an ocean view at the refined French restaurant La Mer at the Classic Shima Kanko Hotel. Here, executive chef Hiroe Higuchi, who also prepared the banquet dinner for JGTC´s Gala 2018 and for the G7 summit in Ise-Shima Summit 2016, serves award-winning dishes. Hiroe implements the farm-to-table concept perfectly, focuses on local production and consumption for added value to her guests and to revitalize the local agriculture for a sustainable future. Conserving and sustainably using the oceans, seas and marine resources for sustainable development is critical.

The renowned chef takes it even one step further. Hiroe visits the local producers regularly to learn more about the ingredients she uses in her cooking, which she shares with her guests to enhance their experience at La Mer even more. Try the Ise-ebi cream soup with lots of Ise-ebi, and the “Ise-ebi American Sauce” made with a boiled Ise-ebi and roasted with the house version of sauce Americana. Since such pleasures are only available when the ban on fishing is lifted from October to April, Ise-ebi has become the culinary highlight of colder seasons.

So, seize your chopsticks and savor this precious treasure of fall and winter.