Gourmet Specialties You Do Not Want to miss in Mie

Mie, which is called ‘Umashikuni’, or Delicious Country in the local language, embodies a long-standing history as well as a profound food culture, thanks to its abundant natural resources. From Lobster, Beef and Chicken to traditional Japanese sweets and special thick noodles, Mie has it all. Below are some of the famous local specialties from the Mie Prefecture. 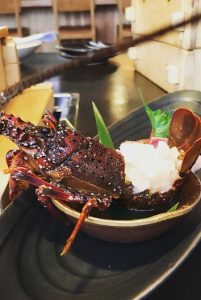 The Japanese spiny lobster called Ise Ebi is known as the king of seafood. One of Japan’s most prized foods, these are caught in the warm, shallow waters of Ise Bay and finds its way into delectable Japanese, French and Italian Cuisine.

Such is the premium placed on the cultivation of these species, that it is prohibited to catch the lobsters from May to September during the spawning season, and only the lobsters that reach maturity in October or later can be caught. Ise Ebi can be eaten grilled, boiled or raw, per your taste. 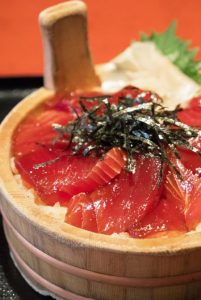 Tekone-zushi is a type of sushi and a local delicacy made by marinating bonito or other red-fleshed fish in soy sauce and mixing it with sushi rice. At restaurants, it is served in a bowl, with seasonings of green perilla, ginger and a special sauce.

Sometimes said to have been originated from a quick meal eaten by fishermen on their boats, this sushi is actually a delicacy fondly eaten to celebrate big catches and other happy occasions. 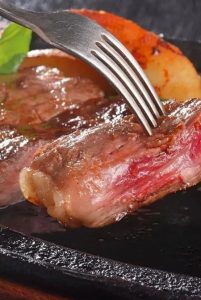 One of the major three forms of beef (which includes Kobe and Omi Beef), Matsusaka Beef is known for its high fat content. This fat has an astonishingly low melting point, so the beef can actually start melting in the palm of your hand, resulting in its rich yet superbly mellow taste.

This specialty beef is produced from Japanese Black Wagyu heifers by feeding female cows ground wheat, with a helpful side of beer. They’re even massaged and raised lavishly with great care to keep the meat tender. Being a cow never sounded so relaxing! 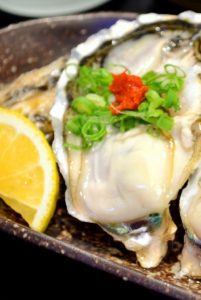 Since ancient times, abalone continues to be treasured as an offering to the gods (Ise Jingu). Each abalone is carefully hand picked by female divers, called Ama, even now, while preserving their ecosystem as a future resource.

The Toba and Shima areas are the perfect habitat for abalone with reefs and plenty of abundant algae (abalone’s food). If you are wondering how’s Mie abalone tastes like, try the pleasantly chewy and meaty flavor yourself! 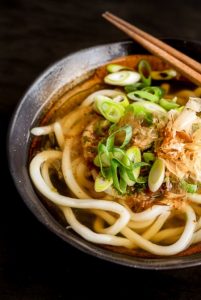 Ise udon is a traditional local specialty of thick noodles served in a dark, rich sauce of tamari soy added to a broth of dried bonito, small dried sardines, and kelp.

The dish is characterized by its refined simplicity that celebrates the ingredients: thick noodles made soft by being boiled for several hours and served with a simple garnish of chopped green onions. 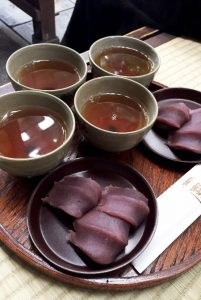 These gooey rice cakes topped with sweet beans are a dessert traditionally enjoyed by worshipers en route to Ise-jingu shrine. This mochi is unique in that, rather than having the sweet bean paste inside of the mochi, it covers the outside of this delicious traditional dessert.

Akafuku are formed into a shape symbolizing the Isuzu River, which runs through the shrine grounds. It symbolizes happiness and good luck, and its recipe has not changed in 300 years! 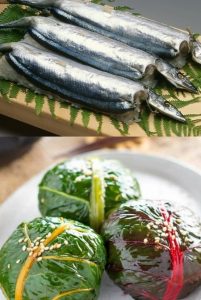 From the southern Higashi-kishu Area of Mie, Sanma-zushi, served at festive banquets, is made by topping vinegared rice with saury from the Sea of Kumano, which is dipped in orange vinegar. The head of the saury is usually used as a decoration on the serving.

Another specialty of the Kumano area is the Mehari-zushi. It is a simple, home-cooked dish of rice balls wrapped in mustard leaves. Mehari means “eyes open wide”, the etymology implying that its deliciousness will be eye-popping for you !! 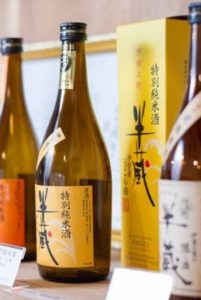 Mie has around 35 local sake breweries, each offering their signature brands that can be paired perfectly with the indigenous delicacies.  “Zaku”, made by Shimizu Seizaburo Shoten, a distillery in Suzuka, was chosen as the drink for the toast at the G7 Ise-Shima Summit in 2016. “Hanzo”, made by the Iga distillery Ota Shuzo, has also become famous, along with other brands from Mie.

Fresh sake is truly amazing and best served cool in summers and hot in winters. Try it, you will not be disappointed. 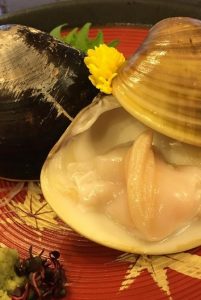 The Kuwana-city in the Mie prefecture is famous for hamaguri (orient clam), that are caught in the shallows, tidal flats, and sandy areas along the seacoast. Kuwana hamaguri clams are meaty and soft, and each bite fills the mouth with its unique flavor with a touch of sweetness.

Shigureni Hamaguri clams, which have been simmered in a sweet sauce, make for a perfect gift. 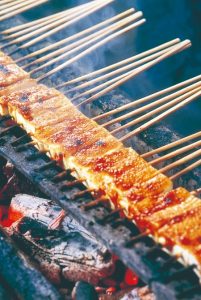 Tofu dengaku was treasured as a valuable source of protein in the Iga region long ago when seafood was difficult to obtain. To make tofu dengaku, homemade miso is shaped into balls and hung outside to mature.

Later, squares of tofu are cut and coated with miso and fragrantly grilled over charcoal to serve fresh. Yummy!! 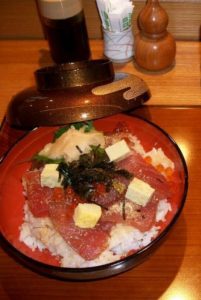 Some of the common varieties include “Dondonbi rice bowl” that consists of marinated chicken with a heaping of Japanese radish served over rice and “Tai no Ise-cha rice bowl” where combinations of sea bream, famous Ise rice crackers, and Ise tea poured over rice can be enjoyed. 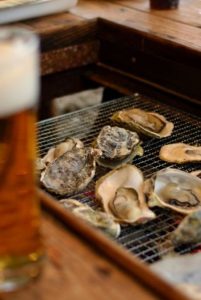 Have you ever wished to eat a stomachful of fresh oysters? In the Uramura area of Toba City, there are plenty of restaurants all over the area offering oysters for all-you-can-eat! As such, “Uramura Oysters” have relatively less astringent taste and are abundant in their “sweetness”, “delicacy” and “tonicity”.

You may enjoy grilled, fumed or fired local oysters or even try the famous oyster rice. So that the oysters can be safely eaten raw, they are cleansed in seawater that has been sterilized with ultraviolet rays for 18 hours or longer until all the seawater in their bodies are expelled.